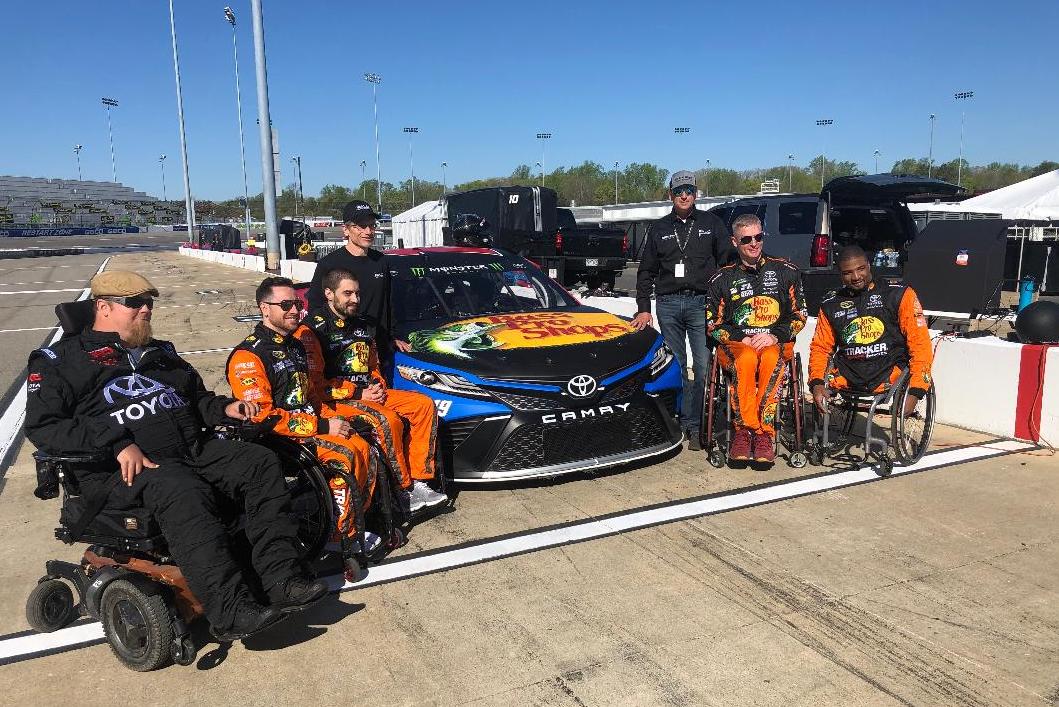 RICHMOND, Va. (April 12, 2019) – Five individuals with mobility challenges, including three U.S. Paralympians were on the fast track Wednesday (April 10), riding and driving the adaptive Bass Pro Shops/Toyota Camry at Richmond Raceway. The event served as a prelude to this weekend’s Toyota Owners 400 and ToyotaCare 250 NASCAR races at the historic .75-mile short track.

It was the second event of the year for the Falci Adaptive Motorsports team, whose NASCAR Cup race car includes special components which allow those with mobility challenges to drive the car hands-and-feet free with only slight movements of the head and mouth.

Before driving on their own, the participants took a few laps as a passenger in the race car with NASCAR Xfinity Series Toyota driver Christopher Bell behind the wheel. The thrill and excitement to ride along with Bell at speeds ranging up to 130 miles per hour and nearly hugging Richmond’s Raceway’s concrete wall was indeed an exhilarating experience for the participants.

Steve Serio, a Team Toyota athlete and co-captain of the U.S. Men’s National Wheelchair Basketball Team when they won the gold medal during the Paralympic Games Rio 2016, exited the adaptive race car eyes wide open with an euphoric smile.

“That was a surreal experience to be a rider and driver of a NASCAR race car,” said Serio, who was paralyzed after undergoing surgery at 11 months old to have a spinal tumor removed. “Coming from New York City we don’t get the chance to go that fast. That first moment when Chris took off, it was a feeling I have never experienced before.

“If Chris pulled up as my Uber driver, I would be really excited to get there quickly but I would definitely strap my seatbelt and hold on. He would drive circles around any New York City cab driver. This event with Falci Adaptive Motorsports is a perfect example of how dedication to innovation can bring freedom of movement to everybody with different ability levels.”

“I felt like I was in a rocket ship,” said Jenifer, who has no legs as a result of being born with congenital amputation. “Chris was awesome. While it was like another day at the office for him my heart was jumping out of my chest. Being a passenger and then driving the car definitely superseded what my expectations were. Didn’t expect to go that fast.

Waller, who sustained a spinal cord injury after being a victim of an inner city shooting in 1992, elaborated on his version of the experience.

“I’ve gone fast on highways, but never that fast,” said Waller in his booming voice. “The acceleration of the race car was really, really cool. I used to work for Goodyear and going around the track on Goodyear tires had a very special meaning for me because I’ve been in the plant where those tires are built. An awesome day and an amazing experience.”

Along with the U.S. Paralympians, quadriplegic individuals – Ethan Thompson and Jake Walter — also took part in the ride along and drive.

“It was everything I expected and more,” said Thompson. “I’ve been a NASCAR fan my entire life and this is a dream come true.”

Walter said after his ride and drive, “The ride was fabulous and pretty powerful. Driving on my own was something else. I would love to take it on the street. That would be so much fun.”

Dr. Scott Falci, a Denver-based neurosurgeon, who founded Falci Adaptive Motorsports, said he was excited about how the event turned out and looked forward to the future with more technology for the mobility-challenged.

Joe Garone, who oversees the operations and fundraising for Falci Adaptive Motorsports, said the adaptive program is moving forward and felt the Richmond event was a total success.

“Everyone at Falci Adaptive Motorsports extends a sincere thank you to Toyota and Bass Pro Shops for their sponsorship of the Richmond event and we also send a great deal of gratitude to the folks at Richmond Raceway for the support and enthusiasm about our program. It was such an electric atmosphere with all the participants beaming with excitement as they rode and drove the adaptive Bass Pro Shops/Toyota Camry.

“Christopher Bell also did a tremendous job as our Cup driver. He was very well received by the participants. We’re looking at additional venues to showcase our adaptive program. Personally, it’s been a wonderful experience and I look forward with great enthusiasm in growing the program that will lead to developing more mobility to the mobility-challenged community.”